Newfoundlanders have got my fucking RESPECT 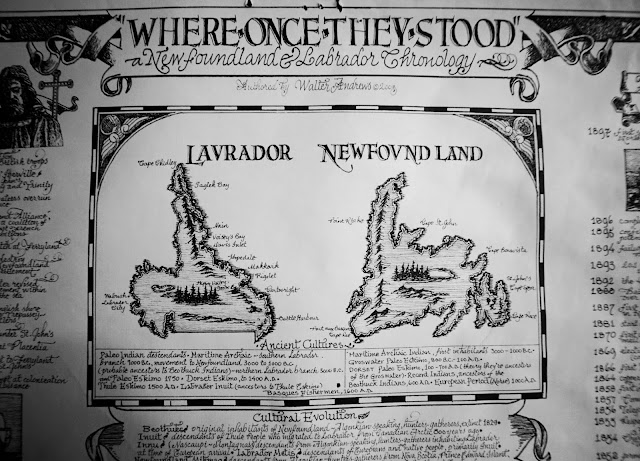 (photo of a map and history of Newfoundland,
as given on the "Where Once They Stood" poster by Walter Andrews ©2003)

The lady at the post office today told us a story about her earlier experiences growing up in Newfoundland, and how she remembers winters where they had like 15-19 feet of snow, and they had to dig their way out from a second story window, because the snow was so high - and they had to be cautious not to step on telephone wires - that's god damn TELEPHONE WIRES 😲😱 - level with the snow, because it had dumped so much cold white stuff! The snow was THAT high, that they had to be careful not to get electrocuted!!!!!! Now THAT's a different level of ninja.

And she wasn't some old lady that told me this story, either - she's maybe 50, so like... that's fracking nuts! That's recent. The shit these people had to go through just to LIVE here. I mean, I'm standing on the shoulders of giants, smart phone in my pocket, typing on a laptop like some rich nerd at a cafe - I'm spoiled and privileged in my life to have seen easier winters, and less war. I can't IMAGINE how horrific it would have been through the ages, with all the wars and battles they've fought (which is a lot more than you might imagine).

This is the battlefront of Canada. These people have given their lives for their families. They grew up without granddads, a lot of them, and they have war in their blood. These people have been through Hell. Like, actual Hell, and I'm surprised they are still doing this out here.

Fuck. Surprised they're alive really. Their history, it's full of intense stuff, and I'm continually awed by the sacrifice and grit of these people.

And if this is the contrast of the battlefront of Canada - and considering I never knew how bad these people had it - having lived so far out West in Alberta (in relative safety), I can only imagine the vastness of war, the damage it has wreaked, and is still wreaking, on the lives of those I've never met, who still battle daily, in less peaceful countries than Canada.

#impressed
#humbled
#feelingthehearttug
#travelbug
#servicebug
#lovebug
By ReyExperiments at February 01, 2019 No comments: Links to this post

Do you know what it means to own your story? It means to stop lying. It means to stop hiding. Are you ready for that? I hope I am. Everything rides on my ability to tell the truth now. I have to be completely honest with myself, my lover, my family.

And I'm scared. I've never let the fractured pieces have a say in the same story. I'm frightened to tell the whole truth.

She assures me I can tell her the worst of me, but I don't trust her. And I think I have to trust myself more than anyone else anyway. If I tell the truth, I tell it for me and I tell it to be free of shame.

The real question is, will I still love myself if I finally include all of these fractured pieces as part of my honest story? And can I tell that story out loud?
By Rey at September 15, 2018 No comments: Links to this post

I'm about to pack up for the last time.

This is an odd feeling as I scrape my memories off this floor... I'm gonna miss that stupid tan carpet... These old windows that should have been replaced two years ago that are growing Mushrooms like something from a strange novel involving fairies and dwarves. That banister I would hang over like a rag doll... The scratch marks at the door from the puppy I loved so much. The table dad built and the storage room that is basically a bunker for the day the apocalypse hits. Gonna miss these little quirks.

My heart is hurting like I've got a medical condition, which I might, but that's beside the point.

I'm moving to Newfoundland. That's huge. I've never been there. I'm moving there not because Ive been there and it feels like home already. I'm scared. I'm tired. I wanna cry. But I'm doing it because of a million reasons. Well. Maybe not a million, but something close to that.

Wish me luck. My heart might need it.
By Rey at September 10, 2018 No comments: Links to this post

I was broken, staring at my phone at an hour when no reasonable person should be awake, but it didn't matter. I was starving for the truth, and my mind wouldn't let me sleep until the honesty had tumbled clumsily from my chest, into my arms, down to my fingers and out onto the page, like a scream tearing a volcano open, bloody words flowing forth like lava onto my screen.

This silent scream, now splitting the page in half with angry words that reverberated against the walls, as though Earth herself couldn't understand the volume and intensity, throwing the sounds back toward the source, like an active grenade.

And there I lay, my own Hellish words echoing, cutting deeply into my flesh with each repetitive wave. Words that had been flung from hot boiling depths, deep within the belly of this broken body, tortured mind, and fragmented soul, so shattered it didn't seem worth the effort to rebuild this messy shell of a human.

But Truth did not abandon me there. She patiently stared back like the reflection of an angel.

"Get up." she commanded softly.

"Your demise was not written in prophecy, your ascention was.

Our story won't end in shattered pieces, broken on the floor like a child's clumsy error.

Rise up, warrior, hero, lover. Embrace the knowing in your heart and feel the power of your internal strength. Listen for the gentle truth that can only be spoken through your own mouth, words that you have been aching for someone else to declare boldly.

Express yourself from that eternal source, which resides inside of your rib cage.

Let the roar of your self-love, rumble up from the depths of your being like existential fire, building islands of safety in your life. And let it give you more than simply life support, let it give you an appreciation for beauty and a hunger for service.

You are brave. You are resilient. You are made of love. You are divine energy waking up. You are the embodiment of our hope for an abundant future.

I like to think this is an anonymous blog.
One that no one really reads.
But for whatever reason, there are still views stacking up.

A handful of people, somewhere read this. And that frightens me. I share stupid things on here. The things I need to vent. And I'm scared. I'm scared of who might read it. What if I'm in danger by posting thoughts online? I am ashamed of my life. I am ashamed of existing. I am small and weak and pathetic, and I'd like to fall asleep and never wake up. But that's just dumb. I can't do that to people. I mean, I could, but I hate the idea.

So here I am. Floating like a fucking weight around everyone's neck. Making it difficult for everyone to get around and do anything without my fucking weight pulling them under.

I'm sorry. Sorry to be such a fucking burden.

I can't even type anymore. I'm too depressed. Good night or whatever.
By ReyExperiments at August 11, 2018 No comments: Links to this post

I share,
cautiously.
And then I retract.
shamefully.
My emotions are invalid.
My needs are ridiculous.
My pain is irrelevant.
I share my emotions -
cautiously.
And then I retract.
shamefully:
I'm sorry I shared.
I'm sorry that I'm sorry I shared.
I'm sorry for existing.
I'm sorry.
...fuck.... why did I say that?
--- -- - ------ ----?
- ---- --- ------.
Scratch all that.
I'm oversharing.
I should delete this.
I should delete everything.
Can I just start over?
Like, can I just go back in time,
and save my dad from dying?
Everything would be different.
Ron wouldn't have married my mom,
Owen wouldn't have died,
I wouldn't have moved to Alberta,
I wouldn't have --- -----
- -------- ---- ------ -- -------
Everything would be different.
Maybe one day
I'll look back on this and remember
what it was like to feel this way
to shamefully regret sharing.
Maybe I'll feel different in future.
Maybe my emotions will be valid.
Maybe my needs will be heard.
Maybe my pain will be understood.
Maybe I can share my life story without shame.
Maybe one day I will own my story.
I hope.
But right now,
all I want to do
is delete this.
By ReyExperiments at August 10, 2018 No comments: Links to this post